Rich and Renting: Understanding the Surge of High-Earning Renters 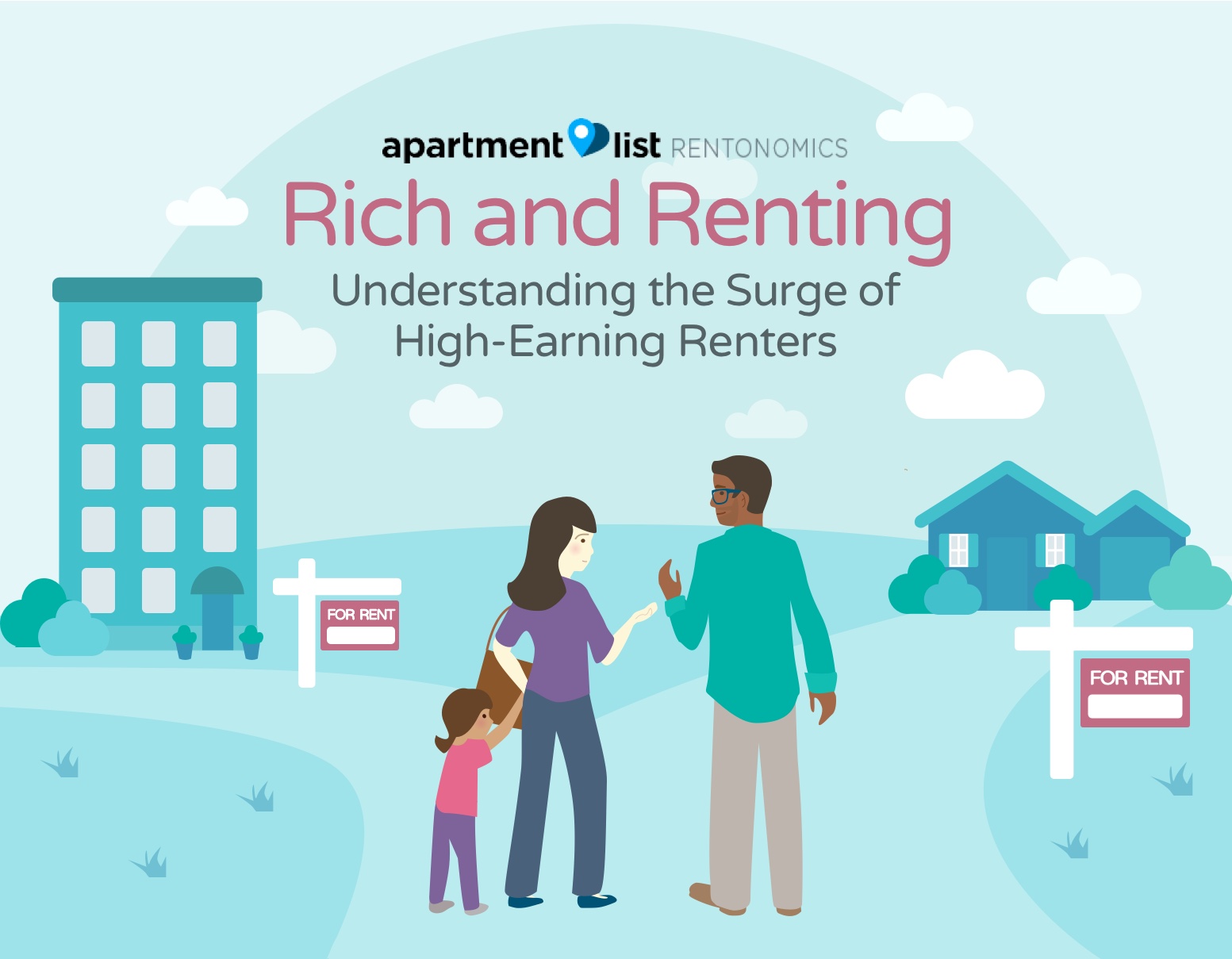 The Rise of High-Income Renters

Homeowners are richer than renters, but a recent wave of high-earning households are entering the rental market and closing this gap. Over the past ten years, the U.S. has seen a dramatic increase in the number of high-income renter households,1 from 3.8 million in 2008 to 5.7 million in 2017. Renter households earning six-figure salaries have become more common in nearly every segment of the country, from major metropolitan cities to the suburban and rural areas in between. During a time when the total population grew by 6 percent and incomes grew by 7 percent, the number of high-income renter households grew by a whopping 48 percent.

Denver and Austin lead the nation in high-income renter growth. These metros housed nearly 2.5 times more six-figure renter households in 2017 than they did in 2008. Other high-growth metros include mid-size, growing cities that attract transplants with their mix of strong economies and relatively low rents, including Oklahoma City (121 percent growth), Memphis (110 percent), and Nashville (96 percent). The top 10 are listed below, alongside the national average. 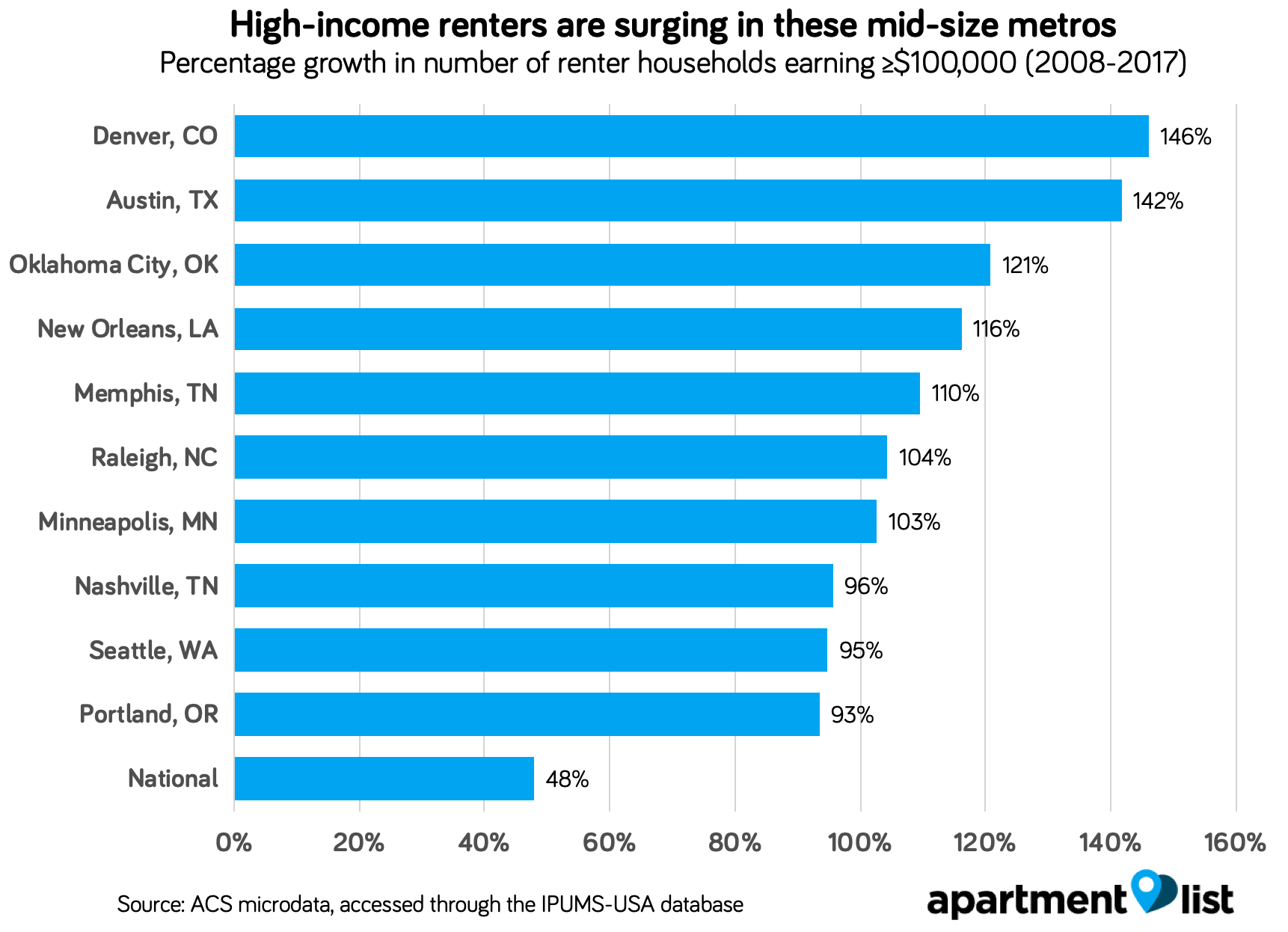 Notably absent from this list are the nation’s largest and/or most expensive metros, like the San Francisco Bay Area, New York, Los Angeles, and Chicago. In part, these cities boast lower growth rates because they already had a large baseline population of rich renters in 2008. Supply constraints in these cities, however, have also played a role in restricting housing options for prospective high-earning renters. As a result, smaller metros that offer strong job opportunities at a lower cost of living saw the greatest change.

The trajectory and timing of high-income renter growth also vary across metros. Washington, D.C., and technology hubs like Seattle, San Jose, and Austin have experienced virtually uninterrupted growth over the past decade. Las Vegas, on the other hand, was significantly damaged by the Great Recession and did fully not recover its high-income renter population for nearly 8 years, despite its overall renter population growing steadily during this time. Atlanta, Columbus, Milwaukee, and San Diego followed similar paths, albeit on shorter timelines.

High-earning households are not the only expanding renter group. The total number of renters in the U.S. has grown 15 percent over the past decade, with new renter households being formed at all income levels. High-earners, however, entered the rental pool significantly faster than others, resulting in a sizable shift in the population. 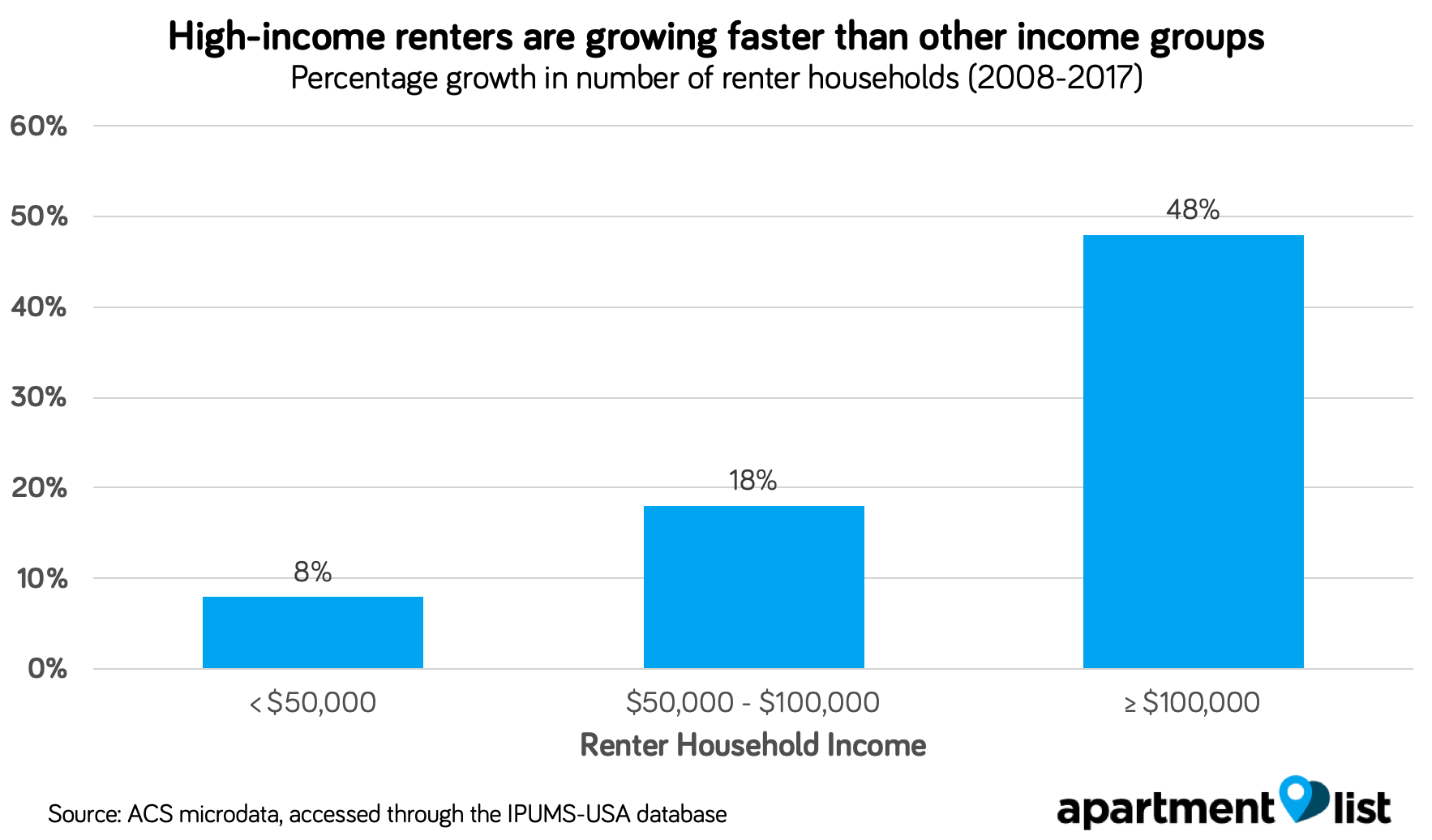 Why are High-Earners Choosing to Rent, and Why Now?

What is luring these well-off households into the rental market? We document four factors: the recent boom in multi-family construction, the growing abundance of single-family home rentals following the Great Recession, increasing barriers to homeownership, and rising demand for both centrality and flexibility. The result is that a combination of new, appealing rentals (growing supply) and an increase in the relative ease and attractiveness of renting (growing demand) are reinforcing one another. 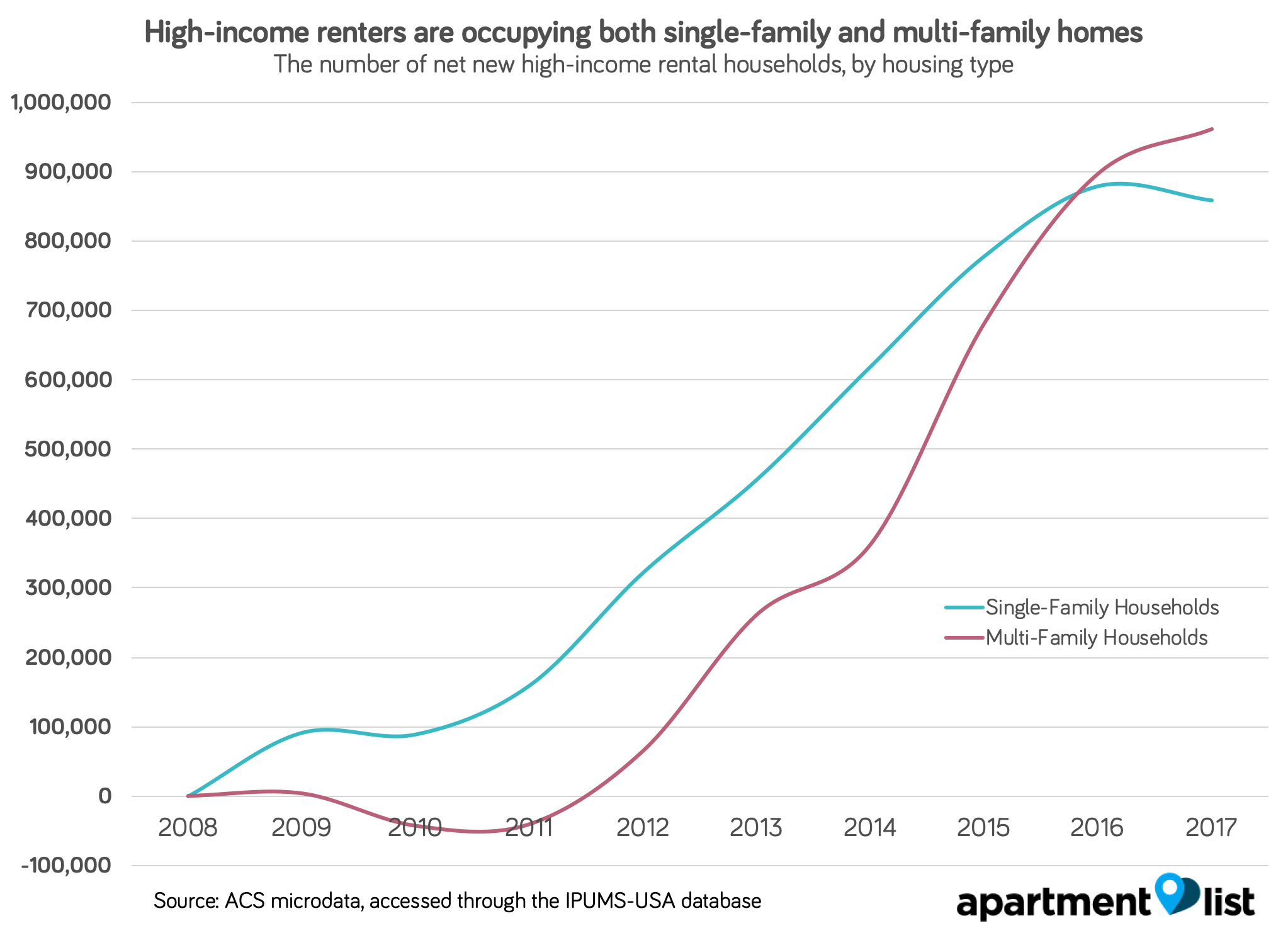 While new rental supply was coming online, rental demand among high-income households was also on the rise. This new demand stems from two sources: barriers that prevent high-earners from purchasing homes, and migration patterns that concentrate high-earners in regions where renting is more prevalent.

Over the past decade, households earning six figures have rapidly entered the rental market. As rental supply and demand both boomed, the homeownership rate fell steadily from 2008-2016. High-earning renters have multiplied especially quickly in mid-size, supply-abundant cities with strong economies. What does this mean for the future of the housing market?

Rob is a research associate at Apartment List, where he examines trends in the housing and rental markets. Previously he worked in public health policy, and before that, graduated from UCLA with a degree in Globalization. Rob can be reached directly at rwarnock@apartmentlist.com.

Homeownership Rates by Generation: How Do Millennials Stack Up?